Saturday evening saw a strange happening in the Jolly Brewer, Broadgate, Lincoln - a pub is full of people, and of all ages! months of careful planning had brought the dreamt of occasion to fruition as Emma Chapman was more than willing to dedicate Saturday 29th August to the forgotten people who once inhabited the pubs on a regular basis. Smokers!
Freedom2choose co-hosted the event with the Jolly Brewer to show people that smokers had a voice and a national organisation to fully air that voice. Emma advertised her 'Smokin' Night' for weeks, much to the amusement of her local licensing officer who's only offering was "good luck with that shit, you'll need it!" Sad state of affairs when a local officer pours scorn on one of its own hostelries for trying to promote itself and its fortunes, but such is the pathetic nature of some! 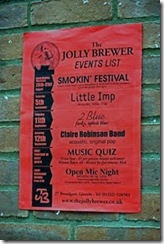 Looks pretty straightforward to me folks - a music night for smokers only which means if non smokers want to attend it is their freedom of choice to do so!
Emma and all the staff wore f2c T-shirts to mark the occasion and very fetching did Emma & daughter Stephany look too! 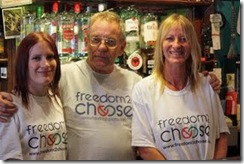 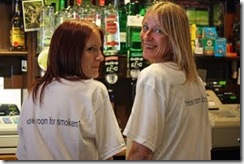 Shame about the thorn between two roses really, but there you go!
As you can see, the back of the T-shirts say it all really, "Make room for smokers", for if the lunatic asylum in Westminster had thought this spiteful smokeban through properly there would have been no need to have the carnage we have seen over the past 2 years where we have now witnessed 4,500 hospitality businesses forced to close.
Despite the ban and despite the determination of this puritanical government to 'cleanse' the country of anything that may possibly force cost on the now beleagre'd NHS, more than 200 delighted smokers turned out on what turned out to be a very cool August night. It was incredible to hear the excited chatter as people ploughed through the literature and discussed choice - yes, I said CHOICE. Many of the attendees were blissfully unaware that f2c were on this planet never mind fighting for their rights as smokers. Many promised to spread the word and the aims of f2c to their friends. The whole aim of this long awaited night was being achieved. Yes we were all outside in the patio'd courtyard with bands belting out some good stuff to accompany the carnival like atmosphere as people smoked when they felt like it as they rabbited excitedly about the choice we are fighting for. 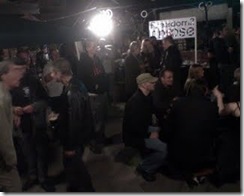 It was dynamite to see so many people enjoying themselves in one place instead of the normal sight of one or two smokers huddled under a totally inadequate shelter or pub doorway. It also showed how simple the answer is to this draconian smokeban-choice! Non smokers stayed away but smokers appeared in droves simply because this night was about them. Lincoln had been set alight (not literally) for one night.
This writer was graced with several stage appearances (between band changes) to address the good people about the aims of f2c. There was much approval shown upon the announcement that Justice for Licensees & f2c were now working together, for with the strength of the CIU as well it was easy for all to see that people power was there and was growing. 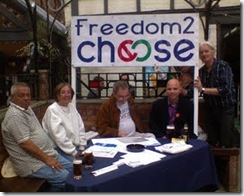 The f2c banner drew plenty of attention with an abundance of literature to be given out to smokers now hungry for knowledge, it was a busy but very pleasing night for f2c'ers on duty.
It is not the most amazing fact in the world that smokers have rights, much to the disgust of some, but it is amazing that so many likeminded people chose to band together for this 'Smokers Festival' night.
I must point out here that not one single smoker, even under the influence of alcoholic happiness, ventured anywhere near the entrance to the pub itself. There was en-masse respect for the landlady and her stance against this evil ban-even this writer remembered to 'dock' his roll-up before advancing to the gents! Such was the enjoyment, the camaraderie and the social contact element of the night that Emma never shut the pub until 1am. This was a night to go down in history as the 'night the smokers fightback began'. Anti smokers may throw their puny little paws up in horror but this will become a regular event as it proved once and for all that where smokers are welcome, licensees take money (not, I hasten to add, the sole reason Emma gave this night to smokers!).
Emma Chapman has seen her business slaughtered by the most evil law ever enacted in this country. This was a golden chance for her to fight back - legally and lawfully - and it was one hell of a fightback. I don't think Emma expected such a turnout as was and one thing for sure was that not one of the plentiful T-shirted staff were idle for many moments during the night.
An interesting footnote to this glorious night with this writer being just a teensy bit sneaky is that a person, who will remain anonymous, went walkabout and looked in on 5 local pubs to find a grand total of 32 customers adorning the 5 premises in total.
The night Lincoln was set alight was the night that the Jolly Brewer enjoyed 7 times the patronage of 5 other pubs together. Why is this? Simple answer really; 68% of regular drinkers are smokers but this namby-pamby government saw fit to take 68% of the pubs customer base away. We have proved this government is wrong - and will do so again.
---------------------------------------
Phil Johnson is the Pub & Club liaison officer for Freedom2Choose, email for details.

I was going to come Phil, but a damn birthday bash got in the way. I missed a bloody good night.

Wish I could have been there Phil - it sounds like you all had a great time.

More to come hopefully, and more people realising that everyone should be allowed a social night out in the safety and comfort that they choose as well.

Well done to all involved and especially Emma and all her staff at the Jolly Brewer.

The witch from Essex said...

Brilliant night and not one person dropped down dead !!

Fan bloody tastic mate. I first came to F2C on the back of what the ban was doing to music. It is still my passion (although I can't play live at the moment) and, to me, this is "music" to my ears. Bands playing to smokers is the "natural" state of affairs and always has been.
In my small way, I am doing my bit on the music front. Tim Hunter (another F2C member) and I are working on, what will be a great album that will no doubt contain many songs about the ban and it's effects and, although I says it myself, is going to be brilliant. It's up to Tim what we do with the songs but, suffice it to say, a lot of what he has written is hard hitting, anti the ban and will be commercial enough to get noticed - and he is making the trek from Leeds to Ilfracombe so we can get the recordings perfect. Perhaps, once we have done it all, we may "launch" it at the Jolly Brewer?? Who Knows?
Effing brilliant - I wish I could have been there - I need a lift. Still, perhaps we can organise one down here in Ilfracombe - I have a hostel that can sleep over 30 people - Ideas come to mind ..... Paul

Thank you Phil for he photos and great article.
I hope to be at the next one.
mandyv

I wish I'd known I'd have shown up. I live in lincoln..