Smoke Screens: The Truth About Tobacco 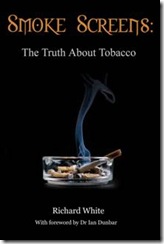 Hot on the heels of Christopher Snowdon and Michael J. McFadden’s books, the former’s Velvet Glove, Iron Fist and the latter’s Dissecting Antismokers’ Brains, comes Rich White’s Smoke Screens: The Truth About Tobacco. I am awaiting Rich’s book through the post sometime soon.  (if you want a signed copy see details below.)


For the last forty years or so I must have been sleepwalking through the anti smoking crusade because it never really hit me  that I was under fire (I am a proud smoker) from their outrageous slings and arrows until I knew that the UK was bringing in the most divisive and corrosive  of smoking bans in Europe (1st of July 2007.) A ban that has made me, and 12 million of my fellow smokers, lepers in our own country.  It was once the ban came into effect that I began to witness the denormalisation of the smoker; to such an extent that violence was being used against us, even murder. I have to ask myself WHY?


Here is the foreword to the book by Dr Ian Dunbar:


"In this conscientious, painstaking and scholarly review of the literature, Richard White has validated my scepticism. The book is encyclopaedic in its content. Among the many topics embraced is ‘detection bias’ whereby the notion that smoking causes cancer is now so ingrained that the possibility of lung cancer when doctors examine non-smokers is overlooked; they are not expecting to find cancer and so do not investigate appropriately. Researchers still do not know precisely how, or indeed whether, smoking causes cancer or any of the other diseases attributed to it; they have struggled with weird and wonderful experiments to try and produce tumours in laboratory animals and failed dismally. The chemicals in tobacco smoke are similar to those in traffic fumes, except that in traffic fumes the concentration is much higher; cigarette smoke is therefore less toxic than the air we ordinarily breathe."


And from the intro:


"Until the 1950s almost nobody would have suggested smoking was harmful, let alone deadly. Doctors even recommended smoking...What is widely overlooked, ignored, or just not known is that a very definite health establishment exists, to which organisations like the National Health Service (NHS) and Cancer Research UK belong. Within this health establishment are the researchers and scientists who depend upon funding for their research. There is now a bandwagon, so to speak; any anti-smoking study is guaranteed to receive grants, and guaranteed to get exposure. Thus, the bigger picture begins to emerge and we can see that scientists and researchers are almost forced to churn out anti-smoking studies, regardless of how bogus they are."


From the press release:


‘Smoke Screens: The Truth About Tobacco’ is the culmination of years of research into tobacco consumption. The book explores everything from the scientific links between smoking and illness to smoking trends between the social classes. It also examines fundamental issues such as detection bias and answers the pertinent question of ‘Why was there a surge in lung cancer rates in the 1930s?’


The book delves into the interests of the pharmaceutical industry and the cancer research organizations to determine whether they have vested interests in the ostracisation of smokers and, if so, where those interests lay. Including extracts from a variety of Surgeon General Reports and an anti-smoking magazine from 1917, ‘Smoke Screens: The Truth About Tobacco’ leaves no stone unturned and provides an encyclopaedic view into one of the largest issues in society today. With global smoking bans now in place and the World Health Organisation declaring a global war against tobacco smoking, the book is timely and relevant. With over a billion smokers worldwide there is potential for this book to be a milestone in recent history.


In your book Richard (thank you for sending me a transcript) there are things I need to know; I need to know them so that I can understand WHY?

What has induced this insanity? I need to know for my own sanity.

Non-smokers need to read your book too, it cuts across all barriers and maybe the most vehement amongst the anti-smokers  will begin to understand why they feel so vociferously against the smoker. Read it, you will not be disappointed!


Rich White’s Smoke Screens: The Truth About Tobacco is released on December the 1st 2009.


To request a signed copy of the book Smoke Screens: The Truth About Tobacco please call Richard on 07575 953 847 or email richwhite@smokescreens.org

Excellent Blog John. I'm sure Rich will be delighted with it.Looking forward to getting my copy of Rich's book soon.

You can see what some proper scientists make of this ridiculous book at Ben Goldacre's Bad Science forum. Best laugh they've had in ages.