Hello Possums, what’s your game? Violent video games Vs smoking in the “Save the Children” charity wars.

You are not getting away with it, we KNOW what you are doing and you WILL be reported!

I remember when I “were a lad” being brought up in that den of iniquity called Glasgow in the late 50’s early 60’s, where a then famous “celeb” called Frankie Vaughan lead a campaign to cut knife crime by giving credence to a knife amnesty. There were no video games then of course and smoking was rife too, but no one came up on a white charger to extol the virtues of  a “fag” amnesty.  But there was old re-runs on the TV, black and white of course, and they even had the righteous on hand to denounce violent “gangster” movies made a few decades previous. Films like Public Enemy staring James Cagney or George Raft in Scarface. And of course nobody turned a whisker when Humphrey Bogart chain smoked his way through innumerable “gangsta” movies. Of course the righteous will take delight in pointing out that Bogart died of cancer, not even stopping to think how many people who were never smokers died of cancer on that day, they will have their moment of perceived  ‘weasel’ triumphalism. 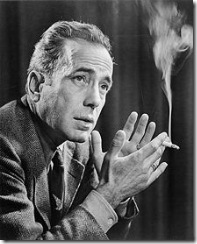 Sorry Boggy, there is “no smoking” allowed on screen, you paedophile you, even if you do have artistic license!

Of course there were many other righteous bansterbators back in the day, the alcohol prohibitionists for a start, who, ironically, brought gangsterism  to an all time high, spawning the many gangster movies I have mentioned above and making huge stars of the Bogart's and Cagney's of the movie industry.

So here we are, many decades on, and the same paternal protagonists have re-invented themselves…with one subtle difference, they have money, and lots of it, not their own of course but yours, the taxpayer.

Here in the UK there are a plethora of ‘charities’ that are mostly funded by Joe Public, I would be here for ever and a day if I looked worldwide at these so called charities, but I’ll stick with  a few here in the UK:

ASH UK (spit) (“Action on Smoking and Health,” and their cohorts RIP (“Reduced Ignition Propensity Cigarettes” not forgetting Smokefree Action to name but two who ALL get government your tax money and pass it around to each other to keep themselves in a job) and I haven’t even mentioned  the bhf (The British Heart Foundation yet!) And there’s more contributions from the anti-smoking ‘charities’ but I could be here all bloody day.

CASH  (Consensus Action on Salt and Health.) If you think CASH is a toothless joke then read this.)

The National Institute on Media and the Family may not be in the pay of government statist sponsorship but it has a ‘quangoesque’ and “fake charity” feel to it. Please think of anything else that the general public likes and Google to see if there is a bansterbating fake charity feel to it…you will be amazed at what you will find.

The National Institute on Media and the Family brings me neatly to the reason for the headline at the top of this page.

The Angry Exile has done a formidable piece on the Gaming Wars by the PC brigade in cuddly animal land, Australia. The same PC brigade that hold sway over you lives politically, whatever country you reside.

As a smoker and a fighter against smoking bans, or any prohibitionistic hedonists who get their jollies by having something banned, I draw no pleasure in seeing such obvious jousting for government taxpayers money between two bansterbating camps, the anti-smoking lobby and the ‘video games are ruining our yoof so lets do something’ lobbyists. I know I shouldn’t have but I did put my arm up in the air, clenched my fist then sharply pull it down perpendicular with my body shouting YES, YES, YES, YES…err…em…sorry, just couldn’t help myself.

Who is this cunt man?

No doubt my fellow co-author at the Freedom2Choose blogspot will have something to say on this over at his place.