I will always love you. 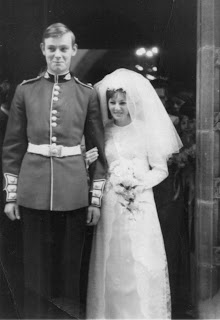 On Thursday the 16th if February 2012 my beloved wife of over forty years passed away after a long fight with Alzheimer's. My lovely, beautiful wife, a light smoker, hated no one but had many dislikes, like most of us do,  but would never, ever condemn anyone who has walked down that long road of life because of their lifestyle choices.

Beryl loved life and was against those that took life away, especially through wars. It was surprising then that she married me, a soldier at the time.

She was appalled at the attitude of people who disliked smoking. During her illness I had to explain to her that we were sat outside of our local pub because of a law that discriminated against us that smoked and we had no choice and nor did anyone care. Often we went outside in the cold and the rain to smoke, an action I feel sorry about as I should not have put her through such a thing. We eventually stopped visiting our local pub as it was so cruel.

Beryl was a gifted artist and music lover who is no longer dancing with the wolves of this world but now dancing with angels. She loved her ballet.

Rest in peace my lovely, beautiful wife, the hounds are no longer out to get you. I will always love you.
Author Unknown at 11:31 No comments:

Loud voices in the anti-smoking wilderness. The Audrey Silk story

Audrey Silk walks and talks like any other down to earth, working class woman. She looks as though she has seen the darker side of life and could recount many stories that would make me and you feel sick to our very stomachs, and she most probably can. You see Audrey used to be one of New York's finest, a policewoman in that world wide iconic city, supposedly so 'good' they named it twice.

Now retired Audrey has another criminal to fight, a corporate criminal who does his work under a cloak of respectability, the billionaire Mayor of her city, Michael Bloomberg. Mayor Bloomberg has a penchant for banning all things that the public likes so that he can take away freedom of choice for the average New Yorker and instead of making life that little bit easier for them he criminalises lifestyle choices whilst neglecting real crime. But this is not about the omnipotent Bloomberg and his quest for a place in the self righteous hall of fame, this blog is about freedom from tyranny and a one woman Goliath throwing stones at an ogre, that woman is Audrey Silk, founder, in 2000 of NYC C.L.A.S.H. Audrey, you make me think of our very own Boudica who waged her own war against roman tyranny and won.

You are awe inspiring and I have put you in my select band of hero's, hero's who fight this onslaught on freedom of expression and choice.

Hat Tip to Wiel Maessen, who is fighting successfully he smoking ban in the Netherlands on behalf of bar owners, for the link to this video.


R.I.P Whitney Houston, you will be sorely missed.
Author Unknown at 12:55 No comments:

To the anti-smoker I say this! Guest post by John Watson

I do not need to change your minds, nor do I wish to. But anyone who believes in freedom believes in these words of Voltaire:


‘I do not agree with what you have to say, but I'll defend to the death your right to say it.’

It was Abraham Lincoln who in 1858 said:


‘A house divided against itself cannot stand.’

These words have stood the test of time: the anti smoking lobby seek to divide the world. If they succeed then evil wins: in the words attributed to Edmund Burke:


‘All that's necessary for the forces of evil to win in the world is for enough good men to do nothing.’

Continuing with Edmund Burke, he also says that:


‘In a democracy, the majority of the citizens is capable of exercising the most cruel oppressions upon the minority’ and that ‘Those who don't know history are destined to repeat it.’


‘Progress, far from consisting in change, depends on retentiveness. When change is absolute there remains no being to improve and no direction is set for possible improvement: and when experience is not retained, as among savages, infancy is perpetual. Those who cannot remember the past are condemned to repeat it. In the first stage of life the mind is frivolous and easily distracted, it misses progress by failing in consecutiveness and persistence. This is the condition of children and barbarians, in which instinct has learned nothing from experience.’

Those quotes could have been written today; they all apply as much today as when their illustrious authors penned them. I do not address such words toward the anti smokers for that would be equal to casting pearls before swine, but to those who smoke and those non-smokers who are tolerant and caring of those who smoke, whom I believe make up the majority of non-smokers, decent freedom loving people so unlike those anti-smokers who breed hatred and intolerance, who seek to pass laws on the back of such evil.


‘All that's necessary for the forces of evil to win in the world is for enough good men to do nothing.’